350 years from the beginning of Jewish cemetery in Dolni Lukavice

In 1714 all county Dolni Lukavice had 19 villages and 3 estates. There were 41 Jewish families with 246 members. The owner of this county was the count Ferdinand Mathyas of Morzin. Jewish settlement existed in Dolni Lukavice at the beginning of 17th century. And the congregation was established in 18th century (probably older) First synagogue burnt down in 1849. The second one was rebuilt into a house. When you leave Dolni Lukavice in the direction to Lisice, you will see the jewish cemetery. This year, there would be 350 years from it´s beginning. It´s located in a hill. Maybe you ask why is it that? Explanation is easy.

There was a religious rule of protection of graves – ancestors for eternal ages. They had to 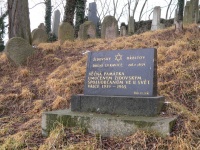 pay for this privilegium a big amount of money. This is the reason why we see jewish cemeteries in hills. It´s the same like in Dolni Lukavice. All cemeteries were protected by a big stone wall and a gate. There also was a small house which used to be a mortuary. If the funeral could not be done in the day of death, the corpse was put to the mortuary where the people waited by the dead body until the funeral. The dead Jew was after cleaning put to the grave clothes, men wore a talit (jewish praying coat) and put to a simple coffin without any decorations, it meant the equality of all people after death. The Jews came to Bohemia because they were looking for protection and safety against persecution. But there were not protected. In 1541 and 1557 during the reign of Ferdinand I. were Jews twice persecuted from the land. Similar things appeared in the time of Marie Terezie in 1774-45, it was the Prague Jews persecution. (emperor rescript from 18th December 1744). Until the equality in 1848 when Jews could not own land, to have a business. They were mostly merchants, changing products, lending money, some financial changes ( a little bit relief became during the reign of Josef II.).

In 1849 in Dolni Lukavice lived quite many Jewish people – at least 7 jewish families: Adler, Straus called Sleml, Barkus, Paradeis called Svihovsky, Trauer and Neuml included Rebe and jewish synagogue. The difference of tombstones shows the cultural and normal life of Jews. The oldest tombstones are very simple. There are sandstone boards, straight on the upper part and decorated by a hewn letters. On some graveyards are some symbols of human activities and jobs. We can find e.g. blessing hands of cohens. Symbolical pair of hands means that here´s buried an descendent of first high priest Aron. Tombstones used to be the work of catholic stonecutters. Jewish people usually were not allowed to do arts. They determined symbolic details – decorations and there had a big deal some jewish writers and gravers. Newer tombstones are made of marble and they are quite similar to the graves in catholic cemetery. We can´t speak about art, when we are looking at the tombsones, they are very simple. It´s mostly the art of people. What is surprising is a fact, that all disasters didn´t touch the cemetery (the disaster in XVIII, XIX and also XXth century) We wish it stayed in the future.

The oldest tombstone what is readable belongs to the year 1711. The last funeral was at the beginning of 20th century. The atmosphere of this cemetery is strange, different, strange power. When I was a small boy, this graveyard was a mystic place, kind of magic. I have never entered to it. Nowadays there are about 150 oldest cemeteries in Bohemia established in the time of ghetto, until the first half of 19th century. The nearest jewish cemeteries are in Merklín, Spalene Porici, Stenovice and Svihov. A big wish of every good Jew was to be buried in the country of it´s fathers so it was a custom to put a small bag with a bit of soil of Palestine (Holy Land) or to put a bit of this soil to the face of the dead man. Jewish tombs are usually situated to the way to Jerusalem, it means after resurrection the dead man should look in this way.

All people who rest in this cemetery in Dolni Lukavice for eternal times – Shalom. 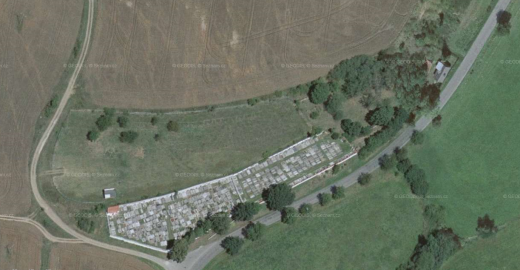