In 1615 it was Jáchym Loubský of Luby and at Řenče, who annexed the village to his estates and took part in 1618 to 1620 in the Estates Uprising. Though he was imposed a fine of forfeiture of half of his property, he got off fraudulently without any damage, for he had that time managed to persuade the Royal Chamber that debts charged on his property were higher than the fine itself. He owned the villages Horní and Dolní Lukavice, Lišice, Háje, Osek, Libakovice, Plevňov, Knije, Krasavce, a deserted village Lomy, the village Snopoušov and Vodokrty with a yard and part of the village Předenice.

Since 1623 many holders had taken turns at Lukavice until 1651, when by sale of the estate to Oto Jiří of Helverson at Tasňovice and Racovy the above mentioned trick was disclosed and the Royal Chamber ordered to sell all the property to cover all damage. The Emperor Leopold I. gave in 1662 his rights to the estate to earl František Albrecht Harrach, who sold Horní and Dolní Lukavice and Řenč by return to Karel Leopold earl Caretto - Millesimo. This sold villages as early as in 1666 to Pavel earl of Mozin. His son Ferdinand Matěj owned, in addition to Dolní Lukavice,also the dominion Seč, in 1712 extended the heritage by Chlumčany and in 1717 in addition by Letiny. In 1708 Ferdinad Morzin had pulled down an old deserted fort and called for a Pilsen architect Jakub Auguston Jr. to build a representative residence here. This was how a three-wing baroque chateau with a horse-shaped ground plan rose in Dolní Lukavice. In 1730 there was finished St-Johann Nepomuk´s chapel in the east wing, on the vault of which had been made a valuable illusive fresco "apotheosis of St. Johann Nepomuk"by Pilsen´s painter František Julius Lux. The fesco was those days a very progressive work as it respected efforts of the Czechs for canonization. The main altar with figural decoration is the work of Lazar Widmann (also Widemann). Statues of the altar represent two more best known saints – St. Wenceslas and Vojtěch in the size larger than life, and they are also Widermann´s work. On the south side of the chateau spreads out a vast park set up in the first half of the 18 th century, designed by Jan Ferdinand Schor. Unfortunately only fragments from Ondřej Filip Quittaineer´s workshop got preserved from sculptural decoration of the park.

The Morzins were in addition fond of music. Especially Ferdinand and his son Karel Josef František were significant patrons of music composers. They had even their own band with 16 musicians. The most significant of them was undoubtedly Josef Haydn, whose activities as a bandmaster here have for long been litigated. It´s assumed that the period in concern might be dated to the years between 1757 and 1761. He composed here his first symphony, s.c. Lukavická, which is however not precisely dated.

Earl Karel Josef František Morzin sold in 1780 the unified dominion of Lukavice to earl Karel Bedřich of Hatzfeld, whom from it was then in 1794 bought off by earl Hugo Damian ofe Schönborn, who made in 1811 an entail of the dominion (property ensured for the family by inalienability and hereditary succession provision) for third Schönborn line. Dominion consisted that time of three estates, that is to say Dolní Lukavice with 18 villages, Přeštice and Žehrovice withe 3 villages and Příchovice with 6 villages

The last estate holder was Mr.Veverka, - since mid 30ies of the 20 th century to 1945, when dominion fell to the state, according to the decree no.12 issued by the President Benešem. In the time of communism there was a psychiatric and detoxification centre here, later then a medical material stock. Now there is placed part of depository of the Westbohemian museum for the time of its reconstruction.

In addition to already mentioned chateau significant sights of Dolní Lukavice include St.Peter and Paul´s church, which is likely to have been, in Haydn´s as well as nowadays, site of the chateau musical group production. It concerns a small early gothic building from the 2 nd half of the 13 th century, rebuilt in times of the high baroque in 1722, that is to say under Ferdinand Matyáš Morzin. St. Johann Nepomuk statue in front of the church dates back to 1714 and in the north of the village square there is a statue on column Ecce Homo from 1741. Remarkable is also a jewish cemetery set up as early as 15 th century, situated on the way to Lišice. Also a baroque double-wing building with an attic roof with the house no.133 is worth mentioning , former brewery from the 18 th century is concerned. 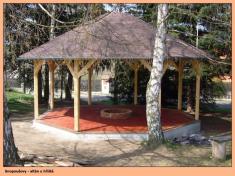