Kornelia Célina was born on 15th December in 1891 in Prague as a daughter of an lawyer and and owner of newspapers "Narodni Listy" Julius Gregr. In 1915 she got married to Ferdinand Veverka in Prague. Her husband was a famous ambassador at his time. They bought a castle, brewery and some forests in Dolni Lukavice in 1938. According to their granddaughter Victoria Veverkova - Duphenieux, her grandmother was fascinated by landscape there and she loved painting there. Kornelia Celina Veverkova became famous especially in the USA and France. In one painting we can see, how she painted two American Indians (taken from a newspaper article in English) 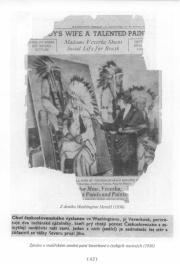 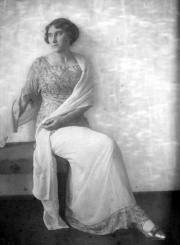 Brandl´s painting of St. Hieronymus in the chapel of Dolní Lukavice

The name of Petr Brandl is known as a synonym of great artist and he belongs to one of the most famous painters in the world. He atracts us with his „wild“ personal life, his art self-confidence and very close connection of work and personal life. In 18th century his name has the same value as Tizian in Venice, Dürer in Germany, Rembrandt in the Netherlands etc.

In 1708 Peter Brandl was invited to Czech castle Chyše. (www.zamek-chyse.cz) by the count of Karel Jiri Michna from Vacinov. He was painting there for three weeks and he got 900 of florints for this work, but unfortunately he spent all this money with the count for drinking alcohol. He got over 3 000 florints a year. 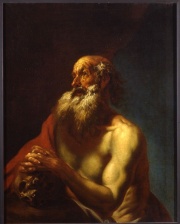 After a year he came back to Prague. He started to paint some paintings of saints: st. Peter, st. Jan Evangelista, st. Matous, st. Lucas, st. Mark, st. Augustin, sv. Georgius, st. Ambroz and st. Hieronymus, which became soon so famous and worth that many counts wanted it in their chapels or churches. In this time counts of Morzins were building a new castle in baroque style and they wanted to have some nice painting in their chapel. They could afford some really good painting, because they were very rich. They ordered a perfect ceiling painting by Julius Lux who was only 25 year-old in this time (1727) and he made an illusionary ceiling painting for them. Morzins desired to have painting of st. Hieronymus by Brandl but it was not easy to get because it was in palace of archbishop in Prague. It was nearly impossible to get it. They wanted to invite Brandl to Dolni Lukavice, but he could not come, because he was very busy in this time – he was in Kuks (castle) working for count Špork. The counts of Morzins decided to have a copy of this masterpiece. In 1730 they got it and put to one of the walls in the chapel. We found out that this painting was there 189 years, because in 1919 the copy was sold for 9 000 Czech crowns. Why was this painting sold we haven´t found.

Note: St. Hieronymus lived 347 – 420 AD and he was a very important Christian writer and he translated Bible into Latin. He was buried in Rome and he ´s celebrated on 30th September.

Bald cypress is a long-lived, deciduous wetland species that grows along rivers, streams, and creeks as well as in swamps with slow moving water. It can live up to 600 years old. It is a legendary tree of the Deep South known for its "knees," moss-draped crown, and buttressed trunk. It occurs in the coastal plains along the Gulf and the Atlantic Ocean and north up through the Mississippi River Valley.

Because of the unique shape of the base of each trunk, artists have created clocks,

furniture, and wall décor from the cross-sections of this tree. In the landscaping industry, baldcypress is planted for its ornamental beauty. Old-growth heartwood is especially desired in the timber industry for its durability and resistance to rot. However, lumber use has declined because it is a slow-growing tree, it is harvested from wetlands, and the population of mature trees is much smaller than in the past.

Bald cypress is not a typical feature of Czech parks, it was first planted in 1845 in

Sychrov. It´s located in castle park in Dolni Lukavice near the castle lake. We estimate that this tree is 170 years old. From historical messages we know that it was brought to Dolni Lukavice by count family Schönborn from one of their travels of the world. They were very proud of it.

From a shoemaker to a painter
Vaclav Cerny was born on 1st July 1865 in Tyniste in house no. 16.  His father Josef was a tailor and his mother was a daughter of a brick layer of Horsice. He studied to be a shomaker and was sent to Wienna by his father. He met there some artists who forcded him to study art in art academy. After very difficult beginnings Vaclav graduated with a degree of painting of Wienna academy of painting.

Portraits, landscapes, still-lives
In 1887 he came to Pilsen, where he started to paint some portraits and in 1900 he participated a big exhibition in Prague, where he sold two of his paintings. After his moving to Dolni Lukavice he started to paint still-lives there and especially landscapes of Dolni Lukavice and surroundings. He also helped to church in Dolni Lukavice, he repaired all standards very professionally, cleaned all altar paintings and a the way of the Cross. On of his paintings found in Narodopisne muzeum in Pilsen – it´s called st. Vojtěch, 65 x 95 cm in golden frame. We can see a bishop on his knees blessing Czech country

His private life
In 1901 he got married to Jindriska Sohajova in church of St. Prokop in Letiny. In 1903 a daughter Bozena was born, one year later second daughter Marie Jindriska was born, but unfortunately both girls died very soon after birth. Maybe this was the reason of moving from Letiny to Dolni Lukavice. They moved there in 1904 and lived in a house no. 105, they paid a rent to count Schönborn. In 1908 they bought this house for 5000 CZK. They had a post office here, Jindriska worked there as a post clerk and Vaclav painted and also helped her with this work. Jindriska used to be very ill.

Painter up to his last days
Vaclav Cerny loved painting and he painted up to his death in 1950. He´s buried in the cemetary of Dolni Lukavice.

Column of the crucification is a smaller, simple monument – it´s of a shape of a pillar. They are in some places covered by a small roof. They symbolize a column, where Jesus Christ was lashed. They usually are on crossroads or hills and came to existence in 14th century. The biggest number of these small monuments we find in the time of baroque. From this time is column of the crucification in Dolni Lukavice. We find it in front of church in Dolni Lukavice.

It ´ s a very valuable monument. K. Hostaš and F. Vaněk wrote in their book „Soupis pamatek historickych a uměleckých v Královstvím Českém“ in 1907 noticed: „In a village square is found a Ioanian column on wide renassaince footstall, there is a small chapel with a statue of lashed Jesus Christ“ On south-eastern side of this column is a sign : LETA PANE | 1741 × NAKLA | DEM ADAMA | HAWRANKA | KE CTI ACH | WALE BO | ZI POSTA | WENO GEST (saying about Mr. Adam Havranek who paid for building of this column in 1741) The Havranek´s family were a very good farmers and were one of the villagers who had the biggest amount of fields in surroundings. The farm of Mr. Havranek still exists, we can find it, it has a number 34 – near the pub (hostinec „U Bile ruze“).

It´s interesting that the Column of the crucification used to be in a different place in Dolni Lukavice, because in this place in front of the church used to be a church cemetery, which had to be removed in 17th century when there was a plaque epidemy and there was no place for burying. New cemetary was built behind Dolni Lukavice in direction to Lišice.

Ionian column „celebrates“ 270 years in this year. In May 2009 was reconstructed thanks to grants from MAS for renewing of rural architecture. In the same year, Municipality of Dolni Lukavice installed the lights and benches. Now we can find a very nice place for relaxing there. Since 2010 the church has been illuminated every day. 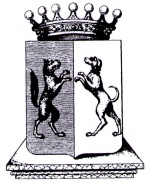 Marie Františka Rajská from Dubnice was born in old Czech family called „Rajsky z Dubnice“ sometimes written „Reisky from Dubnitz“. In their emblem was a wolf and a greyhound in a jump in right blue and left silver field. Vincent Rajsky was in the first half of 16th century a citizen of the city of Pilsen and he got a licence that he can use the predicate from Dubnice. This predicate was chosen according to their seat – a ruined castle Dubnice near Pilsen. Maria Frantiska (Marie Vilemina) got married in 1745 to Karel Josef Morzin (* 1717) who inherited the manor of Dolni Lukavice after his father´s of his father (Ferdinand from Morzin) death. Maria Frantiska and Karel Josef Morzin had 13 children (only 9 lived adulhood). All of them had very interesting jobs and were of high ranks:

Karel Josef Morzin loved art and music very much, so he decided to invite Haydn (Austrian composer) to Dolni Lukavice. His wife Marie Frantiska from Dubnice loved singing and one day when she was singing she looked to the notes and her scarf from her neckline fell out of her neckline and Haydn was so embarassed that he stopped playing.
When the countess died, her heart was put into a special box and then to a tomb of church in Dolni Lukavice. There are two hearts - hers and a heart of Ferdinand Maxmilián Morzin. 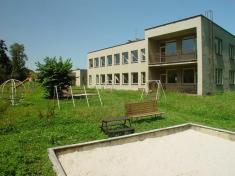