Information on villages around Dolní Lukavice

A huge village, situated in the valley by the river Úhlava about 3 km north from Přeštice.

Lukavice is first recorded as of 1216, related in writing to Štěpán, in 1243 and 1245 brothers Bohuchval and Vitla, the name Vitla is recorded in documents dating back to 14 th century as well. In Lukavice there was a residence of his brother Wilman, his widow Zdeňka appointed in 1366 Vitla as a new parish priest in Lukavice. In 1379 he Vojslav becomes a holder of Lukavice and a certain Otík had half of a piece of land here. For this period most of documents refers to the local church and taking office in a parish. In 1423 the fort was held by Jan of Talmberk, patron of the church was that time Štěpán of Lukavice.

Referring to the Roll of Assessment 1654 the estate belonged to Otto Jiří of Helverssen and there were 7 peasants and 6 cottagers and also one Jew in the village. According to the Theresian cadastre there were a hundred years later 23 farmers, a manorial mill with 3 wheels and a stamp and 4 Jews (a tailor, a peddler, a feathers, linen and tobacco dealer) here, the serfs complained to the commissars about extreme load with manorial labour. This was just when Lukavice was held by  František earl of Morzin, who had built a vast baroque chateau here as a main residence of the spreading dominion. In 1780 Karel Josef earl of Morzín sold the whole dominion to Karel Bedřich earl of Hatzfeld, performing those days a post of the state Home Office. In the years 1758 - 1760 a chateau bandmaster was famous Josef Haydn. 14 years later the chateau was bought by Hugo Damián earl of Schönborn, who made an entail here in 1811. His successor Bedřich Karel bought in addition in 1818 a Lužany estate. The last feudal holder thereof was Ervín of Schönborn, who died in 1881. His descendants were active here until 1945.

In 1900 there were 122 houses,   866 inhabitants and a brewery here, in Háje was extracted a painter´s clay. The large estate was after the land reform bought off as a state confiscated property, then there was after nationalization a mental hospital here in the years 1955 - 1962 . Since 1991 the chateau has been held by the village and though it´s under an overall redevelopment, Haydn´s festival takes place here every year. According to last figures there are 168 houses and 457 inhabitants in Dolní Lukavice. There is a local authority, parish, school, post office, pub, a few shops, a cooperative farm here. A large village square´s dominant is a church, on the south side then a chateau area, a built-up area consists of so far characteristic by classicist estates making up thus, especially along the street to Horní Lukavice a nice-looking complex. New houses are by most built at the outskirts, especially in direction to Přeštice in front of the the farm yard.

The chateau is a baroque building, made in two stages by an architect Jakub Auguston Jr. central part finished in 1708 and side wings finished after 1724. The central part of the chateau with a dome-shaped roof includes on the ground floor a passable vaulted hall, a central main porch. On the floor there is situated a main hall, together with adjoining rooms, a best preserved chateau space. The St.-John of Nepomuk chapel in the north wing, trimmed up   with a fresco by František Julius Lux, was consecrated in 1730. An altar with statues by Lazar Widmann is of great value. The vast chateau park in the French style was grounded by Jan Ferdinand Schor and former rich sculpture decoration was made by Ondřej Filip Quintainer, today´s form originates from the natural landscape painting layout implemented in the 19 th century.


In front of the chateau in direction of the village square there is a complex of   a farm yard and a brewery with the buildings of the baroque origin, adapted at the time of building of chateau. The second farm yard was pitched at the outskirts of the village by the road to Přeštice. On the opposite north outskirts there is situated a large contribution baroque granary.

There is St. Peter and Paul´s church in the centre of the village. The church has got gothic origin, as to the presbytery and a peripheral aisle masonry. The church was a parisch church as early as in 14 th century, curacy then set up in 1407 by Jan of Lukavice to the the Thousand Martyrs Alter. In 1691 the parish was endowed by earl of Morzin again. Thre was established a vicarage those days to the parish, including also a church in Seč, that included parishes in the surroundings of Chudenice ap to Přeštice. The church was rebuilt in an early Baroque style in 1684 and then in 1734, probably by J. Auguston. Here is placed the heart of earl of Morzin and Františka Rajská of Dubnice. Out of undivided fronts projects in the west face a tower with a baroque porch with Tuscan columns bearing a split tympanum. Side porches have also rich baroque profilation. Interieur is flat-ceiling shaped, inserted gallery is supported by stony pillars. There is a small gothic window exposed in the north aisle wall. The vault under the tower is ribbed groyne type gothic one.Trans has a flat vault in the centre, sides cylindrically vaulted, empors are flat-ceiling shaped. Presbytery is cylindrically vaulted with three-sided sectors at the fastener. Sacristy is vaulted, with a flat vault.

Behind the church there is an early classicist storeyed parish from 1800 with an attic roof. Fronts are divided with lisens and a cordon moulding, a rizalit projects over the front.. Schönborn´s coat of arms is placed over a stone portal dated to 1800. Interieur is double-section type, partly with cylindrical vaults. There is a column baroque wayside shrine in front of the church, with inscription on the plinth: "In the year of Our Lord 1741 in an Adama Havránek´s edition in the honour and praise of God is built ".

There are two statues of St. Johann of Nepomuk in the village – high baroque opus from 1714 opposite to no. 82 and folk baroque ones from 1807 on a high plinth by the bridge. At the north border on the hill there is placed a well preseerved old jewish cemetery, dating probably back to the end of the 15 th century, with the tombs dating from the 18 th century. There lived a big jewish community in the village from the 17 th century, which reached its maximum number around 1837, 240 persons represented a quarter of all inhabitants. A synagogue from mid 19 th century had been rebuilt to a living house, today´s no. 93. Behind the cemetery there is situated an old-time timbered small cottage. About 1,5 km far away northwest there is a forested rise with a natural reservation Zlín, protecting a mixed wood with thermophilic flora. 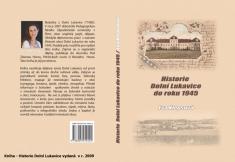